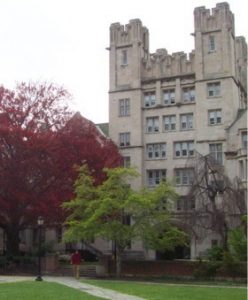 Silliman College was opened in 1940 as the last of the original ten colleges. The college incorporated the Vanderbilt-Sheffield dormitories and Byers Hall, the latter of which contains the Dining Hall, Common Room and Library.

The college was named after Benjamin Silliman (1779-1864), the father of American scientific education. Silliman was the first professor of Chemistry at Yale. Apart from going on to found the Yale Medical School in 1813, as well as the Peabody Museum and the Yale Art Gallery, he in 1818, he founded American Journal of Science; a scientific periodical still published in New Haven today. Silliman also played a leading role in organizing the Sheffield Scientific School in 1847, an event that marked the dawn of professional scientific education in the United States

The college seal, specially designed for the College, takes its motifs from the four elements of the ancient philosophers: red for fire, white for air and water, and green for earth. The golden acorns are from the family crest of Frederick W. Vanderbilt, Yale Class of 1876, whose bequest provided the funds for the building of the College. Because of its legendary associations with fire, the salamander was selected as the college symbol.